William “Billy” Almond was destined to be an environmentalist. Born and raised on the oceanfront in Virginia Beach, Virginia, Billy spent many hours of his childhood outdoors. When he wasn’t on the beach or surfing in the ocean, he could be found exploring Seashore State Park, which was conveniently located at the end of his street. Little did he know these formative experiences would shape his career and life paths.

Fast forward to August 2019. Billy Almond is a licensed landscape architect with over 40 years of experience on a wide range of residential, commercial, municipal, military, and institutional projects. He’s President and Principal Landscape Architect at WPL, a design and architectural firm located in Virginia Beach. He’s also the newest member of the Board of Directors for Green Schools National Network (GSNN). Billy’s background and experience in green school design will be an asset for GSNN as the organization continues to expand its influence in the green schools movement.

“Educational facilities have been a focus of mine over my last 42 years of practice as a site designer and landscape architect,” says Billy. “I am excited to expand my work with schools beyond the built environment while also contributing to the conversation about what makes a green school building and site.”

From Environmentalist to Landscape Architect

At age 14, Billy attended prep school at The Peddie School in Hightstown, New Jersey. There, he became fast friends with an English professor who shared his love of sports (both played soccer and lacrosse) and the outdoors. The professor was also a devoted environmentalist and encouraged Billy’s growing interest in environmental activism. On April 22, 1970, Billy participated in the first Earth Day by helping to clean up a lake on his school’s campus. The ethos of the environmental movement struck a chord with Billy and was one of the motivating factors in his decision to pursue a degree in landscape architecture.

The other motivating factor was Billy’s developing interest in the built environment. Growing up, his father was a general contractor for the commercial and institutional sectors. During his summers off from prep school, Billy worked in construction for his dad on several large projects. His exposure to the many sides of the construction industry fed Billy’s growing passion for architecture, design, and engineering. Combining this passion with his outdoor upbringing and environmentalist mindset made choosing landscape architecture as a college major an easy choice. In 1978, Billy graduated from Virginia Tech with a Bachelor of Landscape Architecture with Distinction.

Going Green: The Evolution of the Green School Campus

Billy’s work with school sites started when he joined Norfolk, Virginia based architectural firm Shriver and Holland Associates in 1979. Approximately 65% of the firm’s practice involved K-12 and Higher Education facilities. During his 21 years with Shriver and Holland, Billy designed a number of elementary schools and high schools, primarily in the Tidewater region of Eastern Virginia. It was also during these 21 years that Billy witnessed a change in philosophy from old-school conventional site design to cutting-edge green site design.

“When I started working for Shriver and Holland, the prevailing mindset for school construction was all about cost effectiveness and building a school within a specific budget and timeframe, especially for the more rural school sites,” Billy explains. “We came up with a ‘cookie-cutter model’ school that we replicated many times over across Eastern Virginia in the 1980s. It was a cost-effective approach, and for rural counties it was the only way they could get a new school at a reasonable cost.”

For Billy, the first noticeable shift in design philosophy came in the mid- to late-1980s with the renovation of Maury High School and Granby High School in Norfolk, Virginia. The schools, both built in the 1920s, were the two oldest schools in the city and were located in historic neighborhoods. As part of the fabric of tight-knit communities, it was important to residents that the new schools serve a larger role than merely places to receive an education. These buildings needed to be functional for a wide range of community activities and available for use on weekends and after school hours. Although common place now, these conversations added a new element for consideration during the design process.

Larger shifts in site design began to play out in the early 1990s. During the design and development of a prototypical elementary school for Virginia Beach City Public Schools (VBCPS), Billy and his colleagues at Shriver and Holland found themselves starting to drill down on the use of the school site. Gone were the “cookie-cutter” days of the 1980s. Instead, more attention was paid to how the site was used – including for teaching and learning. Many sites encompassed land that was environmentally regulated (e.g. wetlands and forests). With dual goals of keeping the land intact and getting kids outside more, Billy and his colleagues started to incorporate trails and footbridges to connect schools with and through these areas. At about the same time (1992/1993), Billy worked on a middle/high school project for Isle of Wight County Public Schools in Windsor, Virginia. As was the case at VBCPS, the shared school site included 25 acres of jurisdictional wetlands that couldn’t be disturbed by development. What could have been a hindrance was turned into an opportunity to use the land as an outdoor science lab. A mulch trail was laid out through the wetlands and monitoring stations, thermometers, rain gauges, and bird feeders were set up along the trail by students and science department staff. It was Billy’s first foray into using the school site as a learning environment and considering how a site’s unique features could be used as teaching tools. It wouldn’t be his last.

In 2000, Billy left Shriver and Holland and joined WPL as a Principal owner, where he led the establishment of the firm’s landscape architectural division. His work with schools continued, as did his relationship with VBCPS and his interest in green school design. Two school projects in particular stand out for Billy as examples of designing school sites with education and sustainability in mind.

The Virginia Beach Middle School project is notable for its shift in rainwater management strategies. Site design for the project started in 2006 on the former site of Virginia Beach High School. The high school building was still in use at the time, so the new middle school building was sited on land used for athletic activities – which also happened to be located near a marsh wetland estuary. Site designers needed to maintain a riparian buffer around the wetland to meet environmental regulations, as well as take rainwater management into consideration, per current state regulations.

Billy and his team settled on a nature-based approach to manage the flow and dispersal of rain by incorporating rain gardens and bioretention areas into the fabric of the school site. Recognizing that this was a perfect teaching opportunity, they installed interpretive signs throughout the school grounds about these features, why they are included on the site, and how they help manage and improve water quality. Their approach was well-received, so much so in fact, that all schools built after Virginia Beach Middle School included rainwater management features that allowed students to trace the path that rain takes from roof to drainage channel to rain garden. With rain and rainwater management being important issues for VBCPS, these features serve as important education tools for students to understand rainwater, where it goes once it falls on the ground, how it’s treated, how it can be cleaned up, and how it re-enters the aquifer. 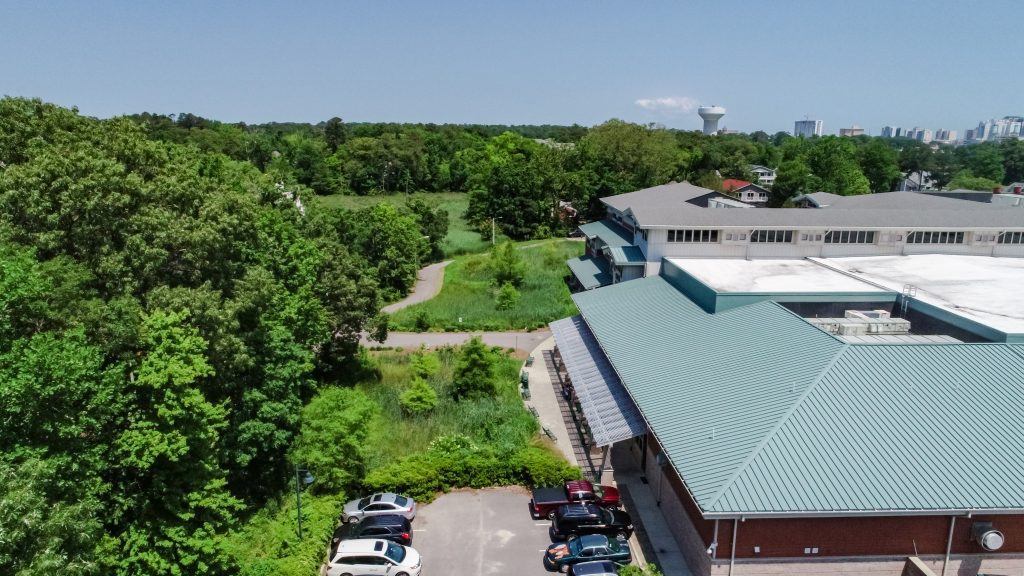 Completed in 2014, the Kellam High School campus is a poster child for 21st century learning. Step onto the school grounds today and you would never know that Kellam was sited and built on a brownfields site. When WPL was commissioned by VBCPS to find a new school site for the high school, it identified and presented several site options to the district. One of those options (which was recommended to and ultimately picked by VBCPS) was a 108 acre site that was intended to be a subdivision. The developer went insolvent and the property was on the market for development.

As WPL was weighing its options for a site for Kellam, Billy become aware of a new program called the Sustainable SITES Initiative (“SITES”). Developed through a collaborative effort by the American Society of Landscape Architects, The Lady Bird Johnson Wildflower Center at the University of Texas at Austin, and the United States Botanic Garden, SITES offers a rating system, like LEED (Leadership in Energy and Environmental Design), for recognizing sustainable site development and landscape design. At the time, one of the principal SITES requirements was that the property to be developed couldn’t be taken out of agriculture, forestry, or other natural use. The criteria aligned well with the abandoned subdivision site, so Billy and his team submitted their site design for Kellam to SITES for consideration as a pilot project. The Kellam project was accepted and the site was given the green light for development.

In the end, VBCPS decided against pursuing SITES certification due to the cost involved. However, Kellam’s participation as a SITES pilot led to a number of sustainability features being incorporated throughout the school site, including green roofs, rain gardens, and rainwater catchment and reuse. One notable feature is a reforestation buffer that was “planted” between the school and an adjacent neighborhood. During construction, a few acres of forest were felled to make way for Kellam’s baseball field. While the tree trunks were used to create benches for the school’s courtyard, the “slash” (branches, seed pods, etc.) was ground into mulch that was then spread out into a 100 foot wide strip. A few saplings were planted, and nature was allowed to take its course. The seeds in the mulch germinated and a forested buffer took root. Today, the trees stand 25 feet tall. A natural buffer indeed. 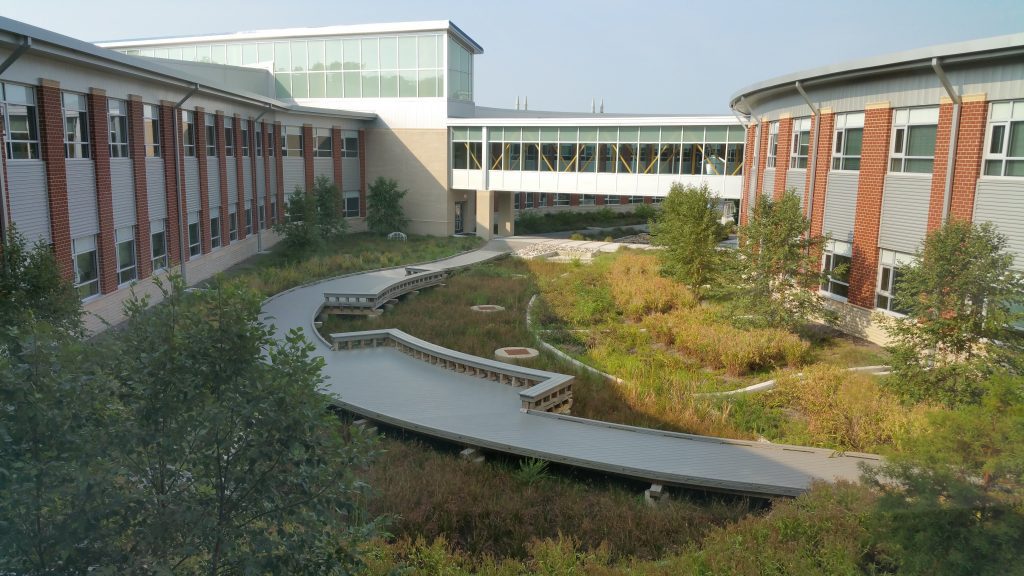 Designing with the Future and Children in Mind

One of the things that Billy enjoys most about working on green school sites in general, and working with VBCPS in particular, is that each new school builds upon the ones that came before it to go to the next level. “Virginia Beach schools have to be one of the pioneers in the country around green design and sustainability,” says Billy. “I have developed a really close relationship with (VBCPS Sustainability Officer) Tim Cole through my work with the district. Tim is all for the next cool thing to do. Because of that, we have really been able to push the envelope in green school design at Virginia Beach.”

Looking down the road, Billy foresees schools continuing to look for ways to use every square inch of their buildings and grounds as teaching tools. How schools use their outdoor spaces will evolve as site designers begin to see and capitalize on the possibilities that school sites offer for outdoor education and teaching about the natural environment. Indoor classrooms are already evolving due to technology’s influence on the learning environment. “It will be a different world in K-12 education in the next ten years,” he says.

As a landscape architect and an environmentalist, Billy strongly believes it’s his responsibility to pass along the messages he received as a boy and a young adult about caring for the environment and being a responsible steward of the land. That’s why he makes a point of going into the schools, talking to classes, and including students in workshops and design charrettes.

“Everything we do as landscape architects is for the next generation. It’s important to educate kids about what I do, but more so about stewardship and the ethical approach to land,” Billy explains. “That’s why I am so happy to see the recent resurgence of interest in environmentalism with young people. The kids are the ones telling their parents to recycle. A whole generation from late 1970s to the 2010s didn’t get the message. Now, we have a captive audience in our schools, especially in K-8 where kids think this is a big deal.”